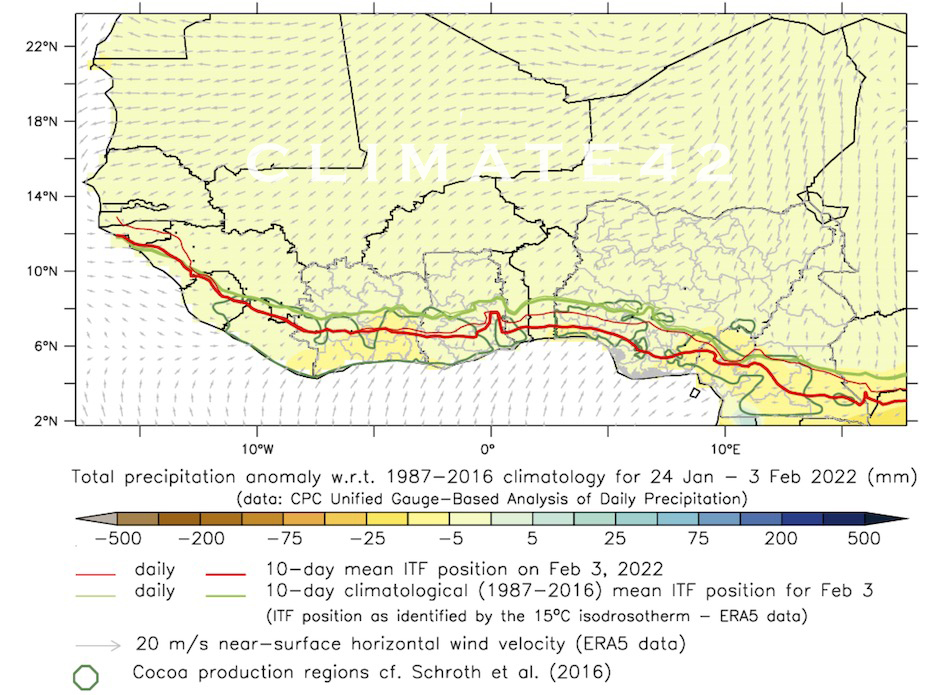 In January, we saw two major movements southwards of the ITF, which is a proxy for the southernmost reach of the harmattan. This intense harmattan activity was not expected, so we took this as an opportunity to check in with crop developments throughout the cocoa belt in West Africa and bring you a summary of our findings.

The 1st harmattan occurrence happened in the beginning of January and was not very strong. Because of this and because the trees still had some water reserves in the soil, this episode was negligible in terms of its effects on the crop.

The 2nd occurrence, however, was of much greater importance. This has been ongoing, with very little breaks, since January 20th. At this time, cocoa trees were experiencing water stress, having used up most of the water reserves that were built by the rains in October and November.

We have studied the field data in order to put together our regional summaries on these effects. Here is a brief synopsis, on a per country basis:

Our short-term outlook for Ivory Coast: The main crop’s last arrivals (February-March) should not suffer any significant loss. The mid-crop potential for April-May is likely to survive and get to maturity with a worsening, but still normal, bean count.

Our short-term outlook for Ghana: It is unlikely that the main crop will suffer due to the harmattan episode in late January. We should see decent arrivals until March, with a better bean count than average despite the adverse conditions. The mid-crop, however, will have lost some steam, but should still deliver good arrivals until mid-June.

The recent harmattan did not significantly affect the trees here. Nevertheless, most sites were heavily under-watered this season and are currently experiencing water stress. We are not expecting a great crop in Cameroon.

In our final remark, the hinterlands of Ivory Coast and Ghana, as well as south-west Nigeria, are in a precarious position, as they are under hydric stress and continue to be exposed to the harmattan threat. Any potential new harmattan episode lasting more than a few days will have an increasing impact on their production. We continually monitor this situation, and issue updates through our Cherelle Reports. 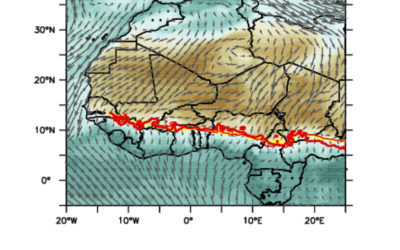 The ITF has been lagging slightly behind its normal position throughout most of the past month, only catching up to it in late November. By the end of the month, the ITF was located right along its average position for this time of the year: near the northern borders... 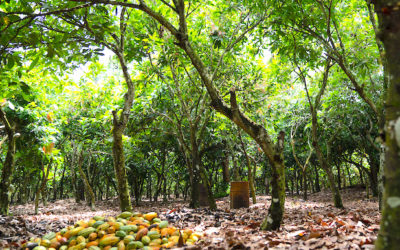 The canopy has continued to improve this month, thanks to the already dense foliage that was produced before the summer, alongside the new leaf flushing seen these last three weeks.   The late nature of the main crop profile means that there are more pods currently in... 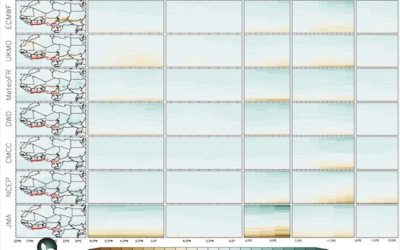 The harmattan is a dry, northeasterly desert wind that blows from the Sahara. It sometimes reaches the African cocoa regions during the Northern Hemisphere winter, drying the plants and soil and hindering precipitation. If persistent, it can be devastating to the...